Web Development with Python and Angular application .You might have built a python application or a MEAN stack application.

What if I told you that you can leverage both the stack and build a hybrid kind of application.

You can build a Front End using Angular and Back-End using python.

This way you can get the best of both technologies.

As we all know that Angular is the leading front-end Javascript framework and python is a very powerful and versatile language and can be used in web development. Here we will be going to be using a popular python framework called Flask.

So, this blog is divided in two parts. First one will be the python based API and the Second part will be the Front-End with Angular

This way you can build an Angular+Python application. This is just one way of making hybrid applications. You can build with any combinations of technologies you can also use React, VueJs and even Android, IOS and other mobile based applications.Web Development with Python and Angular application.

I hope that you will implement these articles and be successful in building your own Angular and Python application.

If you find yourself stuck and finding difficult to solve any error, please comment below and one of us will help you to solve your issues. 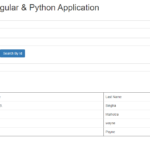 Creation of an App with Angular Form.
Common Errors in Angular